Last December 15, the Oklahoma City Thunder and the Philadelphia 76ers gave the NBA world a game to remember, a triple overtime thriller that saw trash talk exchanges from Russell Westbrook and Joel Embiid. Yet Westbrook had the last laugh after the Thunder prevailed as he waved Embiid a “bye-bye” in the 76ers own court. 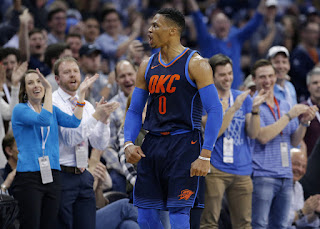 Photo by NBA, Russell Westbrook celebrates in front of the home crowd.

Westbrook flirted with a triple double, Paul George dropped 31 as the Thunder defeat Embiid and the 76ers after three wild quarters before the Thunder gained the upperhand within the final minutes, 122-112 as they cruise for their 8th straight victory.

Andre Roberson, the Thunder’s defensive specialist, suffered a patellar tendon injury in their last game in Detroit. He was declared to miss the remainder of the season as he successfully went through surgery. Oklahoma City has a 16-0 record when Roberson starts alongside Westbrook, Adams, George, and Anthony.

His presence was largely missed by the Thunder, who had a lot of problems in containing Embiid and Ben Simmons in the game. Embiid and Steven Adams had early showdowns in the paint, both bigs bruising their way into the paint. Embiid even went fired up as he dunked on Russell Westbrook and stared him down on a fast break, igniting the emotion for a far more heated battle as the 76ers took their one of many lead changes at 13-12 with 7:35 to go.

The Thunder found their groove for a short while as they led 25-18 after a backdoor cut and layup by Paul George after Westbrook drew his defender, but the 76ers came back quickly with a string of offensive run and guns, including a turnaround jumper from Embiid that cut the Thunder lead to 31-29 at the end of the first quarter.

Embiid quickly tied the game at 31 with another turnaround jumper to open the second quarter. Both teams traded blows, as both got fired up, before the Thunder offense clicked after a stolen pass by Russell Westbrook as he quickly rushed to the rim for a nifty layup, beating Embiid to the spot as he was too late to stop Westbrook and that forced a 76ers timeout at 41-37.

The 76ers would then tie up the game at 44, but again Westbrook went to work, crossing up Bem Simmons for an appointment with the rim - a nasty flush that put the crowd on its feet. Simmons answered back with his own dunk as he caught the Thunder defense sleeping. Robert Covington gave the 76ers a 58-54 lead with 12 seconds left, but Westbrook threw a wild pss to Paul George as he sank the three at the horn to cut the lead to one at the half, 58-57. 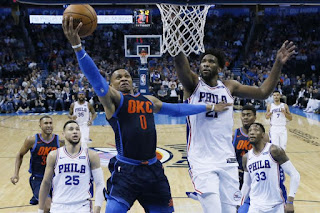 Just then, both teams set the second half on fire as they all clicked on every side of the court. The 76ers made sure that the Thunder won’t be able to take a lead through the first three minutes of the quarter as they built a 75-68 lead on an alley-oop dunk from Ben Simmons.

Joel Embiid was later called for a three second violation. And that’s what sparked the Thunder run midway through the third. Carmelo Anthony drained a three off from a Paul George pass, then a dunk from Jerami Grant to cut it to three, until the Thunder erupted a 13-0 run in two minutes. Westbrook tossed up another alley-oop pass for another Adams dunk, just then, Paul George anticipated a pass and stole the ball, throwing it to a running Westbrook who cuts from the baseline and who takes note of a responding Embiid and makes a reverse layup that fires up the crowd and forcing another  timeout from the 76ers. Paul George made a three to wrap up the run afterwards as the Thunder end the quarter with a 92-83 lead.

The 76ers tried to claw their way back in the final quarter, with some soft hooks from Joel Embiid while Simmons dished out and set the tone for offense, and they’ve been closest at 99-97. Yet the Thunder managed to hold off any more attempts. The 76ers never had a chance to lead afte that Thunder run in the third. Westbrook capped off the game by shooting two free throws, staring down Embiid as the Thunder stave off the 76ers, 122-112 as they extend their winning streak to 8 straight games.

Next for OKC: Visit John Wall and the Wizards.
Next for PHI: Visit Giannis Antetokoumpo and the Bucks.
Labels: Basketball NBA Oklahoma City Thunder Philadelphia 76ers