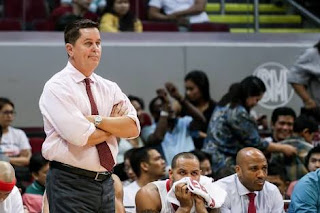 Coach Tim did it twice. How about three apiece?

With a team like Ginebra led by a Coach Tim Cone? The Gin Kings is an undeniably mythical and fearsome team in the league.

Brgy. Ginebra is a champion team not just once but numerous times in different eras. They won titles, all they have to do with Coach Tim is to win titles consecutively. How? Here are some of the ways.

1 - Greg Slaughter to play in ALL GAMES

Greg's attendance inconsistency due to injuries distorts Ginebra's core gameplay. He is a starter so he plays a significant part in the overall game of the team and yet he is frequently out than in. Therefore, the team always experience major adjustments depending on his presence. Uncertainty would rattle the whole team because they are not sure what would happen if this guy would come back or would be pulled out.

Coach Tim sticks to only some of the Ginebra players and most of the guys were benched or given a little bit of time to play. Hence, Ginebra becomes very predictable especially to their rivals with great players and a smart coach. Now if Coach Tim would mix his player pool a little bit further, who knows if another combination of five would emerge?

3 - Be a Philippine Cup Champion

Gin Kings could dominate other leagues with an import like Justin Brownlee but in an all Filipino Brawl, they remain one step short against the mighty SMB who reigns for 4 years currently and is threatening enough to conquer the All-Filipino tournament in the coming years. The San Miguel Beermen is an immovable object in the path of Ginebra to greatness. It's either an improved team through designing new plays plus specialized individual training for the key players or a magic bunot in the next PBA draft to add a super rookie that may match the Kraken's overwhelming power.

Everyone has a chance to win a grand slam but achieving such dream would take a lot of hard work and hard work. Any team is eligible but Ginebra is worth watching for.