Game 2 Dominance: LeBron James Reminds Everyone Who the King is 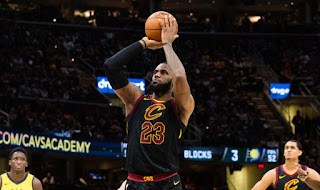 His Game 2 performance is nothing short of majestic

After getting stunned by the Indiana Pacers in Game 1 which snapped LeBron James' streak of winning every Game 1 of the playoffs in his career, Coach Tyronn Lue said that the Cleveland Cavaliers need LeBron James to be more aggressive.

As it turned out, the King heeded the coach's call.

In a LeBron James-style, the Cavs opened Game 2 of their best-of-7 first round series with 16 straight points- all from LeBron James and held back the Indiana Pacers late in the 4th quarter to get a 100-97 victory which tied the series at 1 game apiece with Game 3 happening in Indiana. This saved the Cavs from heading on the road with a 0-2 series deficit but then again, LeBron James has been down 3-1 in an NBA Finals series and you know what happened, right? So, the Cavs shouldn't be worried about their Game 1 loss, to say the least.

Despite 46 points and 12 rebounds from LeBron, Cleveland hasn't had an easy game in this series as they hadn't had an easy regular season which saw them fell from third to fourth place in the Eastern Conference during the final stretch of the 82-game schedule. Fortunately for the Cavs, Victor Oladipo who scored 32 points back in the series opener, missed a three-pointer with 27 seconds left. Had Oladipo made that shot, it would have changed the outcome of the game and there would have been an overtime.

Even if Oladipo had made that shot, 27 seconds is still enough for Tyronn Lue to draw up a play specifically for LeBron James to take the game-winning shot not because nobody else can do it but simply because LeBron James had been playing amazingly all game long. And yes, LeBron James was the only bright spot for the Cavs in Game 2. Kevin Love was MIA again, scoring 15 points on 5 for 16 field goal shooting. Kyle  Korver, the other player who scored in double figures, had 12 points on 4 threes.

With almost nobody to help him carry the team, what would you expect from LeBron James?

Given how close the final score in Game 2 was, Indiana is expected to come back stronger starting in Game 3 and we can almost expect Victor Oladipo to try to match LeBron James' intensity.

However, we all have to remember one thing: once LeBron James starts rolling, he's virtually unguardable. And we all know that nobody on the court and actually guard the King, right?