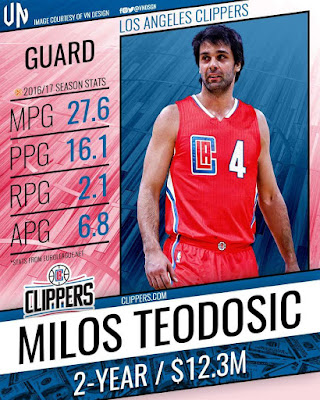 After the departure of star point guard Chris Paul, the Clippers were scrambling for a replacement, but could there be any player that can even come close to the production of their previous point guard?

There are probably a few that can match up to the all around production of Chris Paul but some of them are either not available or too expensive for the Clippers.

Signing Milos Teodosic for $12.3M  for 2 years is actually a bargain as Milos is one of the greatest players in Europe averaging 16.1 points and 6 assists, he could give a new look to the Clippers.

Milos, while highly effective in Europe, may not work right away in the NBA because of different styles of play but if Clippers management is dedicated to making him the main point guard, I could see him flourishing and immediately producing the same number he was producing in the Euroleague.

Personally, I think this is a great acquisition for the Clippers.

Check out some of the accolades of Milos Teodosic Euroleague

What do you think about this move?