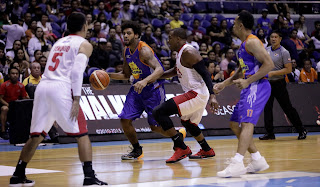 If there's one game where both teams knew that they cannot afford to lose, it's probably this game between crowd-darling Barangay Ginebra Gin Kings against the Talk N Text Katropa.

Why? Let's just say that if Ginebra will lose this game, their road towards a back-to-back Governors' Cup titles will be much complicated because we all have to remember that the Meralco Bolts can still snatch that Number 1 seed from the Gin Kings, should the Bolts win tomorrow.

As for the Katropa, a win against the Gin Kings will enable them to finish the elimination round with an 8-3 record and should the Bolts go on to win against the San Miguel Beerman tomorrow, Talk N Text will have a fighting chance via the PBA quotient system to enter the playoffs as the number 3 team.

As it turned out, Ginebra will have to wait for the result of the Meralco-San Miguel game tomorrow to know their fate after the Talk N Text Katropa dominated them 122-98 which pushed the Gin Kings' record to 8-3 after 11 games

The first half was a see-saw battle with Ginebra leading after the first 12 minutes of action and then TNT just started stepping on the gas at every scoring opportunity as Jayson Castro buried 3 of his attempts from beyond the arc as he led TNT with 17 points and 4 assists at the break. TNT took an 8 point lead into halftime despite the struggle of their import, Glen Rice Jr., who had 16 points on a miserable 5 of 15 shooting.

Ginebra on the other hand only had Justin Brownlee who had 14 points at halftime to lead the Gin Kings. While Ginebra forced their opponent to make only 35% of their shots from the rainbow country, they allowed TNT to dominate the 2-point area which saw Castro and company 61% of the shots inside during the first half as compared to Ginebra who only made 42% of their shot within the 2-point area.

When the third quarter started, TNT started building a double-digit lead which reached 14 with under 8 minutes to play in the quarter thanks to Rice Jr's aggressiveness. In addition to this, local players of Coach Nash Racela made a significant impact throughout the game to counter the earlier struggle of their import. Ginebra fell behind by as much as 17 points after a trey from Rice Jr. with under 6 minutes to go in the quarter. In fact, Ginebra struggled to sustain an offensive run as TNT would simply answer every run they make with a scoring run of their own as the lead later ballooned to 20 after another 3-pointer from who else? Glen Rice Jr. who scored 18 points in that quarter alone. RR Pogoy later hit a 3-pointer of his own to put TNT up by 22 with 4 minutes to spare. Ginebra's Head Coach Tim Cone could only watch as his team fell behind by 17 entering the fourth quarter.

TNT wanted to make sure that they kept Ginebra at bay as they started the 4th quarter with back-to-back treys from Jayson Castro which forced Tim Cone to call a timeout 2 minutes into the quarter. The Blur would later add 2 more treys and Pogoy would score on a fastbreak dunk as TNT  continued to pound in on the points.

What doomed Ginebra in this game? Tons of things. They weren't able to contain the 3-point shooting of TNT. They allowed Castro and company to make the most of their opportunity from beyond the 3-point line, converting a total of 17 out of 40 attempts which is a far cry to Ginebra's 6 of 23 attempts from beyond the arc Ginebra was also outscored in terms of the fastbreak points where they only converted 6 points compared to 19 fastbreak points by TNT.

Glen Rice Jr. recovered from his early slump to lead his team with 36 points including 6 of 13 attempts from rainbow country. Castro complimented their import's performance with 28 points on his own to go along with his 7 assists.  Troy Rosario added 15 points, which includes a perfect 3 of 3 shooting from beyond the arc, and 10 rebounds while Kelly Williams finished with 10 points and 11 boards. Roger Pogoy finished the elimination round with 15 points to lead TNT's players off the bench.

On the other hand, only Justin Brownlee and Japeth Aguilar managed to score in double figures for the Gin Kings as Brownlee and Aguilar finished with 28 and 19 respectively. The rest of the Gin Kings struggled miserably starting with LA Tenorio who only made 1 of his 9 attempts for his 6 points.  Joe Devance was also struggling with his offense as he only converted 3 of his 8 attempts, good for 7 points for the night. The Gin Kings cannot simply play this way if they want to win back-to-back Governors' Cup titles.