Balls-Eye: Cavs if Rose Weren't Injured in the Past 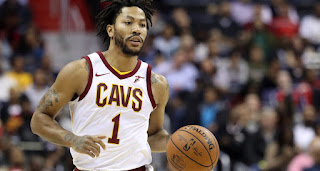 Derrick Rose. The former Chicago Bulls core. An ultra-fast point guard even the biggest of players didn't dare to stop.

He was so close to being called the next Jordan. In fact, circumstances favor the title. He's on the same team as Jordan was during his heyday. He has the intensity that brings the crowd on its foot and brings the game into his own 'showtime'.

Derrick Rose, without any doubt, is exceptional but his potential gradually dropped due to an injury that nearly put a dead end in his career. Now he is back and is playing for the Cavs. But what might have happened if the old Derrick Rose were to be in Cavs?

If Derrick wouldn't have been injured, most probably he would not be traded to Cleveland. He'd be raising his own Bulls' flag and go head to head against this era's basketball prodigies like LeBron James, Kevin Durant, Stephen Curry and Kyrie Irving. Chicago would once again be a threatening team no one would take easy. But let's say some circumstances lead to a tough decision of a full form Derrick Rose being traded to Cavs.

Imagine Derrick as another LeBron but a way quicker one. How could any defense stop LeBron and Rose simultaneously pushing forward? One of them is too much but what more if they are perfectly augmented. As a matter of fact, they are still just two. Cavs have another three extraordinary guys in the name of Dwyane Wade, Jae Crowder and Isaiah Thomas. It's like battling against the best of superstars.

It may not have been LeBron's Cavs but Derrick's instead. We could not say that he could not be compared to LeBron and Durant who are today's considered to be the best players. It may have been a Derrick Rose era and not LeBron's. Cavaliers may rally a long dynasty of championship domination through the long years. The Boston Celtics might have been struggling to grab the top spot.