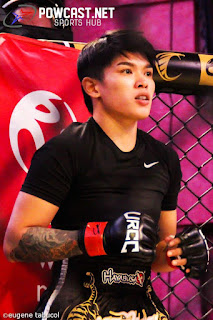 Universal Reality Combat Championship will be holding URCC 28: Vindication. It will feature four title bouts. Four warriors will cement and defend their place as the Champions of their divisions.

Featherweight title holder Do Gyeom Lee will go in a war with Ryan Dela Cruz as the maint event. CJ 'The Golden Boy' De Tomas vs. Alvin 'Kastigo' Ramirez is the co-headliners of the night. The two will compete in a flyweight championship bout.

Geli Bulaong will be stepping in the cage with one of the top prospects in China Yan Qi Hui in women's flyweight in hopes for obtaining the first URCC female championship crown. The aspiring MMA athletes will definitely show no mercy for each other to make one's fight historic. Both have the women's fight game in the palm of their hands going into URCC 28. Now all they have to do are clench and knock them out.

Subsports Philippines’ Women’s MMA standout, Geli Bulaong (1-0) is set to take on Chinese MMA fighter Yan Qi Hui (1-0) for the inaugural URCC Women’s Flyweight Championship this November. Bulaong has made an impressive debut last April 23, 2016 on URCC 27: Rebellion. She submitted Jen Damaso via a standing guillotine choke in just three minutes. Bulaong is currently a blue belt in Brazilian Jiu-Jitsu and is truly improving every single day as a well-rounded MMA fighter and is determined to face stiffer competition as she will face rising Chinese fighter, Yan Qi Hui. This fight will determine URCC’s first ever women’s flyweight champion!!!

Women's fight on the card introduces no. 5 ranked Sanda fighter in China, Yan Qi Hui is an undefeated Mixed Martial Arts Fighter that has vast experience in the art of Sanda. Sanda is a standup style of fighting which also allows throws, but no grappling. She last fought on August 13 against Iranian fighter Masume at Chinese Kungfu Championships. QiHui took care of business and won via first round knockout. Now she is aiming to become the first Chinese URCC titlist and will face a hungry and promising fighter that will surely give her a challenge for the belt, and that is Geli Bulaong. History is going down. Find out who will go on to triumph in the inaugural women's championship at URCC 28: Vindication this coming November 6 at the Marriott Grand Ballroom in Resorts World, Manila.