Holloway vs Pettis Set for UFC 206 in Toronto 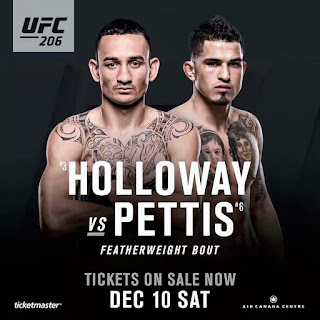 As two of the most dynamic competitors in the UFC, Max Holloway and Anthony Pettis have established themselves as must see TV for any fight fan. On Saturday, December 10, these featherweight contenders will meet in the Octagon for the first time as they collide on the UFC 206 card at Air Canada Centre in Toronto.

In the UFC 206 main event, the UFC light heavyweight championship is on the line when Daniel Cormier defends his crown in a rematch against Anthony "Rumble" Johnson. Tickets are on sale now.

Check out how the UFC 206 fight card is shaping up | Get tix now!

Currently ranked third in the world at 145 pounds, Max "Blessed" Holloway is on a nine-fight winning streak that has seen him turn back the likes of Cub Swanson, Charles Oliveira, Jeremy Stephens and Ricardo Lamas. Determined to bring a world title back to Hawaii, he knows that he will be hard to ignore if he extends his streak to 10 with a win over Pettis.

A human highlight reel who has held lightweight championships in the UFC and WEC, Milwaukee's Anthony "Showtime" Pettis made the move to the featherweight division in August and immediately soared to the number six spot in the rankings thanks to a third-round submission of Charles Oliveira. Now he'll square off with Holloway in the hopes of securing another big win and possibly a world title shot.

Also announced for the UFC 206 card is a bantamweight bout between Mitch Gagnon and Matthew Lopez, and a strawweight bout pitting Valerie Letourneau against Viviane Pereira. Pereira replaces the injured Poliana Botelho in the 115-pound matchup.